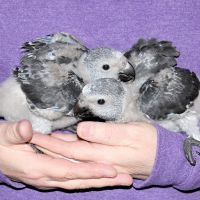 Perspective is everything, isn’t it?  One thing about the internet is that it allows everyone to give their opinion, which is fine except for when it is given as fact.  Just as the bullies on the playground in grammar school were usually the loudest, sometimes those giving their opinions as fact also come across in the same way.

What got me thinking about this?  A few days ago I read a series of posts on some facebook-based bird group  that were basically saying anyone breeding parrotlets without knowing all the genetics were terrible people that should not be breeding at all.   Not only did you need to understand the genetics, you needed to know the exact genetics of each bird from which you were breeding.  Nowhere was there any mention of quality of the birds.  It’s funny, because in years past I remember the loudest “experts” of the time belittling anyone breeding for specific mutations.  The cry then was that quality was all that mattered and anyone breeding for mutation (color or pattern) had to be in it only for the money.  It seems those declaring themselves experts are both judge and jury as to what is acceptable.

Personally I think you have to look at the quality of the birds if you are going to breed.  If there is an obvious fault in either male or female, why would you want to perpetuate that in the young?  However, it’s often just as easy to find a good quality bird in a mutation as it is to find a bad quality bird in the normal color. In that case, why not breed for more exciting results than just the normal color?

I don’t dispute the fact that if someone is going to breed – whether it be birds or dogs or whatever – that the person should do all they can to research the subject first.  That includes trying to familiarize yourself with the way the genetics work.  Even if you are not that interested in mutations, if you include them in your breeding it is so much nicer to be able to pass on what you know about the offspring to future owners in case they also want to breed in the future.  To be able to tell them that their new bird is split to lutino, for instance, is a wonderful thing.  Often you find a bird that is lovely and the owner has no idea what the parents were, let alone going back more than a generation.  To listen to these experts, you could not use this bird for breeding.  I totally disagree with that approach.  What you get for offspring will usually enable you to backtrack to discover what the parent birds are carrying.

The actual facts here are not as important as the idea that when people feel they can make these big pronouncements of what is acceptable, they are really being rather obnoxious.  It’s a shame people in the bird world can’t be more helpful to each other, rather than being so cut-throat and nasty.  I find it discouraging.  Was it always this way and just that the internet tends to expose these things?  Could be.  Or could be that the internet itself is responsible for helping these attitudes flourish.  The schoolyard bullies have never been in greater numbers than what you find on the internet.  Pick any article and then read the comments after.

A few days ago I spent some time watching TV Land in the morning.  The Andy Griffith Show was on, with several episodes in a row.  I really feel that all kids growing up should be exposed to shows like this.  Yes, times were simpler then for sure, but it’s the people and how they behaved that seems to have become a thing of the past.  What happened to some of the old adages, like “if you don’t have something nice to say then don’t say anything at all”?   I’m convinced the world would be a much better place if people would just keep their nasty remarks to themselves.